Another incredibly busy Fairtrade Fortnight has flown by in the world’s first Fair Trade Nation, and what fun we’ve had travelling across Wales. This year, we asked people to get together to have a Fairtrade Break – from Mad Hatters Flash-mobs to Pancake Parties, International Women’s Day Celebrations to hearing how Fairtrade offers a voice to rural communities in Palestine. One things for sure, the people of Wales made it clear that Fairtrade is important.

Whilst we love the numbers, the highlight of Fairtrade Fortnight each year is always the people; from supporters to producers. It’s great to be able to hear stories and learn more about how selling on Fair Trade terms can help communities to break the cycle of poverty; reminding us why we choose Fair Trade instead of non-Fair Trade products. This year, we invited Martha Musonza-Holman and Dyborn Chibonga to form part of our team attending events across Wales.

Martha is originally from Zimbabwe and sells Fair Trade crafts from her village in events and festivals across the UK. The majority of the crafts are made by mothers of children who have disabilities. Jobs are scarce in Zimbabwe, and the secure income of work they are able to do at home means that they are able to look after their children better. Over the past two years, Love Zimbabwe, the Charity through which the craft products are sold, have been able to pay for a community centre to be built in the village to provide a safe space and education centre for these children who are (not allowed/unable) to go to school because of their disabilities. Martha is a teacher, and in every school we go to the children are enthralled by her story.

Dyborn is from Malawi and works with small-holder farmers of rice and groundnuts (peanuts) to improve their lives through earning more from their products. You might have seen Kilombero Rice or Liberation Nuts in the shops. Dyborn is the Chief Executive Officer of the National Smallholder Farmers’ Association of Malawi (NASFAM), and joined us for a week talking to schools, businesses, Assembly Members and Rugby fans about the impact of Fairtrade on these communities.

Dyborn has worked for NASFAM for 17yrs, and when asked why he still worked there, he responded with:

“It is so inspiring to work with farmers across Malawi. Many have only a primary education and when I see them training in reading and budgeting, and able to run themselves, well…”

– he smiles out of the window, transported back to the rice paddies of Malawi. A country where 60% of under 5 year olds have such severe malnutrition it causes growth stunting. The farmers of NASFAM who are selling on Fair Trade terms have been able to pay for their children’s food, for their secondary education, improve their own knowledge and make their businesses sustainable for the future.

Highlights from the team

Aileen: “Whilst giving out chocolate buttons to all sorts of Rugby fans getting ready for the match. I asked them two small questions – ‘Have you heard of Fair Trade?’ and ‘What do you think Fair Trade means?’ Almost everyone I spoke to got it right. I know the statistic that there is 83% recognition for the Fairtrade Mark, but that afternoon made me realise what it meant.”

Elen: “Phyllis, 9 year old on the farm with cows mooing in the background, asking Dyborn how climate change is impacting him and his fellow farmers and what we can do about it.” Listen to what she learnt below..

Ffion: “Getting to see all the young citizens of Wales promoting Fairtrade and knowing that Wales’s status as a Fair Trade nation is in safe hands.” 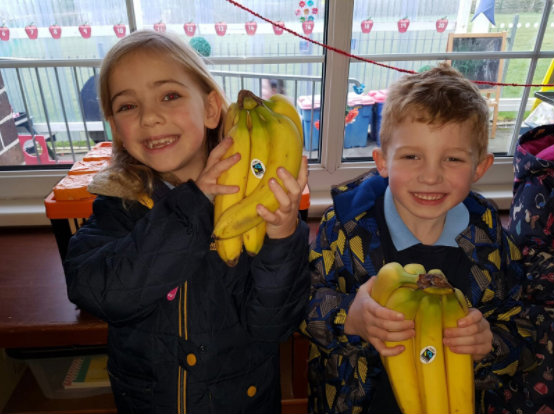 Have you been inspired by Fairtrade Fortnight? If you’d like to learn how you can get involved with future Fairtrade activities, follow us on our social media channels @FairTradeWales or sign up to our newsletter. Join the growing Fair Trade nation!